My friend Tom Beery has experienced God’s grace and an employer’s compassion in ways I hope I never do.

You see, Tom is a cancer survivor, but a survivor of not just any old form of cancer. Tom was diagnosed in 2016 with esophageal cancer. Thirty years ago esophageal cancer was considered a death sentence, and even today it claims the lives of the majority of people afflicted with the disease.

I’ve known Tom for more than four decades, going back to our days as fraternity brothers at Bowling Green State University. If anyone ever was equipped with the positive spirit and irreverent sense of humor needed to handle such a diagnosis, it is Tom.

Even so, the diagnosis was a shock to the system for Tom and his delightful wife Michelle. For one thing, Tom loves to sing. Indeed, singing is part of his being. 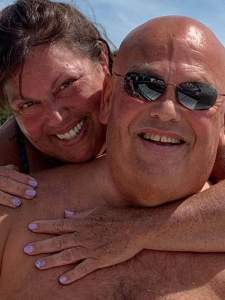 When we were back in school Tom sang in the Bowling Green Men’s Chorus, a terrific ensemble that performed throughout the Eastern United States. After college days Tom would sing professionally for what he describes as an “acapella do-wop group” for 15 years until the group broke up.

Tom took a sharp genre turn 28 years ago and began performing classical music with the Dayton Philharmonic Chorus and Chamber Choir. He has been blessed to take the stage with the choir not once, but twice, at New York’s famed Carnegie Hall, and often has performed our National Anthem as a soloist at sports venues.

Suddenly, singing would need to take a back seat to surgeries and cancer treatments that would tear apart a part of his body that was instrumental in producing his beautiful voice.

Then there was his job, which Tom hadn’t had for all that long before his diagnosis. Tom had worked as an assistant golf professional for 15 years before he made a huge leap of faith in 2014 and went to work for Dorothy Lane Market, a small gourmet grocery store chain in Dayton, Ohio.

Would this employer be sympathetic toward its relatively new employee and the challenges he faced?

And what about battling the disease itself? Would it inflict not only a physical toll on my friend, but also rob him of the joy in his life and turn him bitter, especially toward a God who would allow this disease to happen?

For the answers to those questions, I’ll turn the floor over to Tom, who agreed to share his experience in writing.

Some of what follows isn’t for the squeamish. However, I think it’s important to know what Tom went through for two reasons — one, so you understand how remarkable it is that Tom has seen God’s grace even in the midst of his trials, and two, so you can see the difference a compassionate employer can make in someone’s life.

Upon being diagnosed with cancer, my attitude was, “I got this!”  I was immediately set up for surgery to remove a small portion of my lower esophagus. At the time, I was told, “No chemo, no radiation.” Words you like to hear, but you know God’s sense of humor. “You make plans, God laughs!”

By the time my surgery was completed, the doctors had removed that portion of my esophagus… and a bit more.

I had 80% of my esophagus removed. I was “re-plumbed,” bringing my stomach up and reattaching it to the 20% of the esophagus still intact.

With that much cancer found, they decided a treatment consisting of a chemo infusion, two rounds of oral chemo, a round of oral chemo and radiation, followed up with two more rounds of chemo and an infusion to send me on my merry way! Those five to six months were total hell. My recovery required over a year away from my job.

After being three and a half years removed from the surgery, I had an epiphany of God’s grace. My manager at Dorothy Lane stopped by a few weeks back, shook my hand and handed me a “5-Year” anniversary pin for working at the store. I thanked him, but reminded him that I had officially worked for the store for just 4 years with my year’s absence for recovery. He assured me that those days away were still counted, as I was still seen as a member of the Dorothy Lane “family.”

I went home that evening and showed my wife the pin. She, too, was amazed at the store’s generosity…

Michelle and I talked more about it and realized what amazing things the store had done for us during the past 3 ½ years. First, my employee discount was never rescinded. Also, our store has a program where we can donate unused vacation time to others who may need it for emergencies. I received several hours of “time” from my fellow employees.

We would receive phone calls from my department from time to time asking if we needed food and other essentials. We may have asked for a few things, but bags full of groceries would show up on our front step.

During my time off, some of my fellow employees would come, sit and visit. There are only three stores in the chain. It’s a family-owned business. Even the owners would call on occasion just to see how I was doing, did we need anything, how treatments are going, etc.

As my healing progressed, I needed something to do to get me out of the house for a few hours. The store allowed me to come back and do some menial tasks. Just getting out and back into a work routine was MUCH-NEEDED therapy!

That “5-Year” pin opened my eyes to how God’s grace was all around us during those dreadful days. Even today, my supervisor knows that my energy level starts to wane after about 5-6 hours of work per day and schedules me accordingly. Only working part-time and just 25 hours a week works out just fine!

Sometimes, you have to just step away from a past experience to see how God’s grace is all around us. That’s how it’s worked for me. Today, I am 3 ½ years Cancer FREE! I thank God, my wife, family, friends and a small grocery chain in Dayton, Ohio, every single day!

I second that emotion, and I’m happy to say that Tom continues to perform with the Dayton Philharmonic (he missed only one year during his cancer recovery) and still belts out the National Anthem at sports events. Quite the guy.